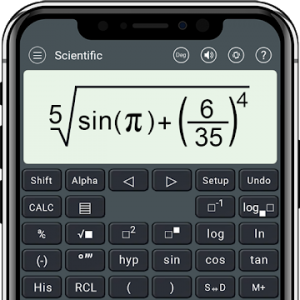 It is a scientific calculator supports most of the features of Casio jx570ms, fx570esplus, 570vnplus …
It is a basic calculator
Graphing calculator with algebra, assential for math class in school or college.
Is a conversion tool between units such as weight, volume, area, length, currency, capacity, pressure, speed, time, temperature …
❤ This application has 1000 mathematical and physical formulas, as a quick reference manual.

You are a student? You are tired of the 100 calculations in the countless daily exercises you have to calculate. You feel depressed and things are so hard on your scientific calculator.But with the Scientific Calculator you can do more than that, you will feel computation has never been so easy and fun. This helps stimulating your desire for dry subjects requires a great deal of calculating from simple to complex mathematical operations.
You are a salesman, cashier, accountant, perhaps this app is all you are looking for and expect, unlike traditional calculators and In other scientific calculator applications, you can’t perform calculations with large numbers. this application is capable of performing calculations with large numbers of up to trillion. Most importantly, you are always looking for ways to save calculations to use it as a bill that is not possible with traditional wallets and other applications. But with our application, it becomes extremely easy with the history list of calculations.