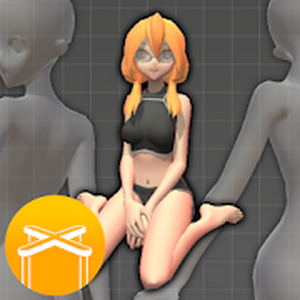 EasyPoser is a human body pose app for people who draw or is learning to draw. Have you ever wanted a personalized model to show various poses while drawing animation, illustration or sketching? EasyPoser was developed for these people.Various angles of different poses can be inspected. Now you do not have to draw with a wooden joint doll or figure as a model. Even yoga or exercise poses can be checked from various angles.

1. Sensitive Operation – EasyPoser allows control over the main joints in an amazingly smooth manner. It provides multiple functions previously unavailable in other pose apps such as a highlight on movable parts, initialization of joints and manipulation state, and finding a symmetrical pose with the mirroring function. Experience controls that are more convenient than with a mouse.

3. Multi-Model Control – A scene can be made with a made with a maximum of 6 people at once! It is now possible to make a scene of a soccer player avoiding a tackle or a couple holding hands and dancing.

4. Tens of poses that have already been completed. Poses that are used often are already made. About 60 poses have been prepared and these poses will be regularly updated.

5. Other Characteristics
– Sensitive light expression using direct and backlight settings
– Able to observe various poses at various angles
– Realistic shadows such as shadows of models being cast over other models
– Able to change the angle of view (possible to use an exaggerated vanishing point such as a panorama)
– Provides a wire mode that allows lines drawn over models
– Able to download models without the background in a PNG clear background.
– Automatic saving, making it safe whenever there is a device error.
– Able to easily control hand movements.

7. Paid Version Upgrade Benefit
– Completed poses can be saved and recalled.
– A woman (normal), woman (small), man (small) is provided other than the original model.
– Several models can be brought on screen at once.
– There are no ads.
– All “Completed Poses” can be used.