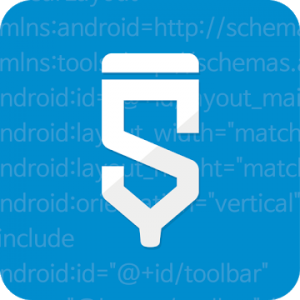 It’s okay if you do not know anything about developing Android apps. Sketchware is an IDE that uses block language like Scratch, an innovative programming language invented by MIT that transforms the complex language of text-based coding into visual, drag-and-drop building blocks.

Scratch is such a simple language, even little children can learn to develop. Sketchware translates Scratch into Java and XML source codes, so there is no limit on what you can develop.

Sketchware provides tutorials you can follow to become an expert at Scratch block programming and Android app development. Each example contains programming concepts you can understand by completing the project.

Visually design and develop apps, then simply run your app with a single click to build and install directly on your Android device. The projects are fully compatible with Android Studio, an IDE used on a PC, so you can export your finished project and continue working on Android Studio, or your favorite editor. Also, if you create an account, you can also share your project to our server, where we safely store for you.

Disclaimer: This app was developed independently of the MIT Scratch Team, which produces the Scratch programming language and online community. The Scratch name and Scratch cat are trademarks of MIT.