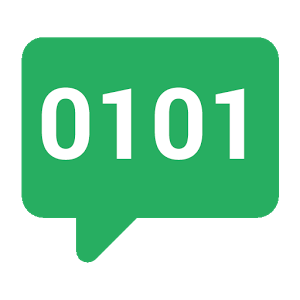 Binary Translator &Converter++ nows ads-free !
Binary Translator helps you talk in binary code, a fun way to share confidential messages.
Conversion from binary code to text and vice-versa is done instantly. As you type letters you’ll see those represented in binary and with a simple tap you can switch to the binary-to-text converter. Once you finish writing your message, you can easily copy that binary code (or text) and paste it elsewhere. This way you can send messages encoded in binary text via SMS, email or any other social network. Since the messages show as sequences of 0’s and 1’s, only those with some technical knowledge will know how to decipher binary to text. Have fun while dialogging in binary code but also benefit from its privacy.

Main features:
Instant binary converter. Binary Translator instantly converts text to binary code and vice-versa. Just select the type of conversion you need (text-to-binary or binary-to-text) then start typing to see a translation in real time. Multiple languages and special characters are supported. Whatever your input, Binary Translator will convert it to binary or the other way around.

Simple UI, fast binary conversion. Binary Translator was optimized with usability in mind so its UI is incredibly simple & intuitive to use. As soon as the app is loaded you can start typing to have your text converted to binary or add 0101 sequences to convert binary code to plain text. You also have 2 buttons to copy and paste the converted binary text in another document, send it in a message, form, etc.

Multiple app themes. Binary Translator comes by default with a Matrix-style green-ish theme.k If that doesn’t align with your taste you can pick one of the other available themes, Material Blue or Material Dark Blue. No matter the theme the translation from and to binary is done at the same blazing speed. Now you can do binary conversions in your own style!

Secure conversations. Prying eyes are everywhere so the beauty of Binary Translator is that you can also use it to exchange confidential messages. Just decide what you want to write, type it in and have that converted to binary. Use the Share button next to send that message via Facebook or send it in an SMS, email or whatever you feel like sharing through. Whatever your message is, once it goes through the binary text translator it will seem indecipherable. Obviously, the recipient of your message can either use Binary Translator as a binary converter or decipher text the old fashioned way (if they understand binary).

Did you know that binary systems date back from the 9th century (BC) and were initially used as a form of text for divination? Or that it is the basis of the Braille language and used intensively on modern computers (i.e. data on your CD/DVD/Blu-ray)? That’s why using binary code is not only fun, but also incredibly useful. Binary Translator is the lightest binary converter with instant binary-to-text (and vice-versa) translation. It’s the only app you’ll ever need to understand binary and even better, talk in binary.

If you’re looking for a place to talk in binary add a comment and fire away, we’ll 01 you a reply! We’re also trying to make this app fit all your binary-to-text (or text-to-binary) needs so if you have any suggestions/feedback just head on to our social channels to talk with us:
» Facebook : https://www.facebook.com/BinaryTalk.0
» Twitter : https://twitter.com/BinaryTalk_